Over 32 hours of record breaking darts 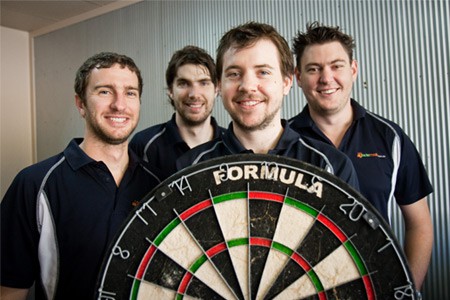 The team at Excite Media can often be found out in the back break room playing darts …. so we thought to ourselves, why not play for a purpose! It was for this reason that we decided to take on the world record for the longest ever four person darts marathon.

The event was held on the weekend of the 22nd and 23rd of May 2010, and the team decided to make a big event of it – and so the Darts Charity Challenge was born. The rules for the world record attempt were as follows: Two teams of two must play against each other in official games of darts, with only a 5 minute toilet break permitted per hour.

A great result for a great cause

The event raised much needed funds for the following four charities: A very generous donation from major event sponsor “Ray White Kenmore Village” got us under way, and over the course of the event we were able to raise a total of $4016 which was split evenly and donated to the four charities. Excite Media was extremely proud to be able to help the four charities with this donation, and to top off the event we were able to reach our target of 30 hours to break the record and also add a little bit extra to it! At 32 hours and 4 minutes the last dart was thrown. We have submitted all of the official information to Guinness, and we are now anxiously waiting to hear back from them before the record is official. For more information on the event please have a look at the event website – www.dartscharitychallenge.com